More than seven years after their original proposal, the SEC adopted new rules requiring companies to disclose metrics reflecting the relationship between executive compensation actually paid and the company’s financial performance.  Mandated by the Dodd-Frank Act in 2010, the rules were passed on August 25, 2022 by a divided 3-2 vote.

The rules will apply to all reporting companies, except foreign private issuers, registered investment companies and Emerging Growth Companies. As discussed below, Smaller Reporting Companies will be permitted to provide scaled disclosures.

The rules become effective 30 days after publication in the Federal Register.  Companies must begin to comply in proxy statements that include specified executive compensation disclosure for fiscal years ending on or after December 16, 2022. Accordingly, December 31 fiscal year-end companies should begin planning now to address the new disclosure requirements in proxy statements for 2023 annual meetings.

Although given flexibility as to location in proxy statements, companies must provide the following tabular disclosure: 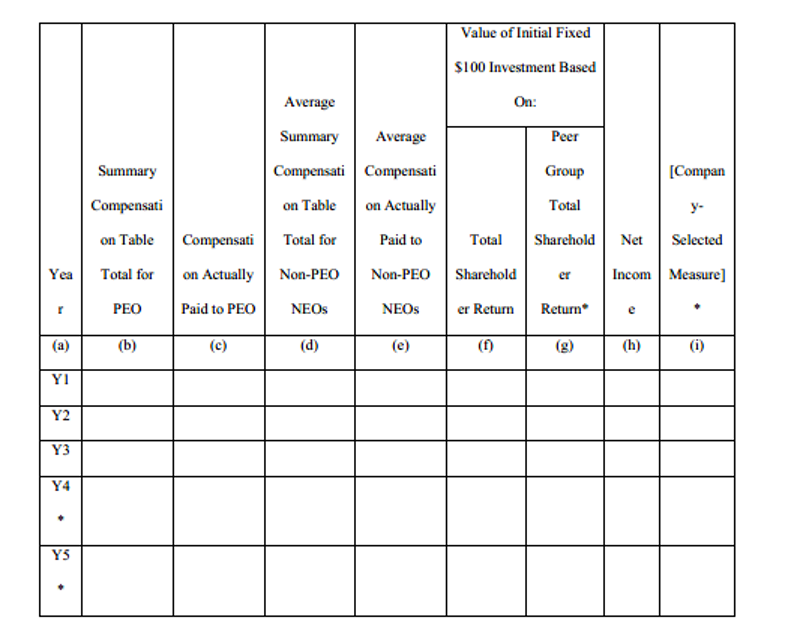 The new table calls for disclosure of the specified metrics for the last five completed fiscal years:

1. Total shareholder return (TSR) for (x) the company and (y) the company’s peer group (weighted by stock market capitalization at the beginning of each period for which a return is indicated)

Companies may use either the same peer group used for the Performance Graph or one used in CD&A for discussion of compensation benchmarking practices. If the peer group is not a published industry or line-of-business index, the members of the group must be disclosed in a footnote or, if previously disclosed in SEC filings, by incorporation by reference to those filings.

As with the Performance Graph, if a company changes the peer group from the one used in the previous fiscal year, it will only be required to include tabular disclosure of peer group TSR for that new peer group (for all years in the table), but must explain, in a footnote, the reason for the change, and compare the company’s TSR to each of the old and new groups.

Two Commissioners dissented from the rulemaking:

Peirce criticized the rule as “unnecessarily complicated” and believes the SEC should have taken a “principles-based” approach.  She noted that the SEC itself acknowledged that the rule will not provide significant benefits, since companies already provide a detailed CD&A discussion of the material elements of executive compensation. Further, she believes “the fundamental variation across companies’ compensation practices and the underlying assumptions some of the disclosures necessitate will render the new presentation anything but clear and comparable.” In addition, she expressed concern that the rule “could distort how public companies compensate executives and how investors evaluate companies’ compensation decisions.”

Uyeda criticized the SEC for failing to update the seven-year old economic analysis and related cost-benefit discussion – particularly in light of 10-12 year old equity award data used and the general move by companies away from use of stock options and pension plans.  He also criticized the SEC’s reliance on a 16-year old hourly billing rate of $400 for outside professional advisors used by companies.

The rules call for disclosure of total compensation as reported in the SCT, modified to adjust the amounts included for pension benefits and equity awards as follows:

(1) actuarially determined service cost for services rendered by the executive during the applicable year (the “service cost”); and

(2) the entire cost of benefits granted in a plan amendment (or initiation) during the covered fiscal year that are attributed by the benefit formula to services rendered in periods prior to the plan amendment or initiation (the “prior service cost”), in each case, calculated in accordance with GAAP;

Footnotes would be required for any valuation assumptions that materially differ from those disclosed at the time of grant.

The SEC acknowledged that requiring fair value calculations for each equity award on a date other than the grant date may be burdensome but believes that the concept is not novel, as GAAP requires re-valuation of modified awards.

As with the Performance Graph, TSR should be calculated on a cumulative basis measured from the market close on the last trading day before the fiscal year in the table through and including the end of the fiscal year for which TSR is being calculated (i.e., the TSR for the first year in the table will represent the TSR over that first year, the TSR for the second year will represent the cumulative TSR over the first and the second years, etc.).  Both TSR and peer group TSR should be calculated based on a fixed investment of one hundred dollars at the measurement point.

Description of relationships between metrics

Companies will need to describe the relationships between each of the financial measures and the executive compensation included in the table, as well as between the TSR and its peer group TSR.  The descriptions may be graphical, narrative or a combination, and – if “clear” – may be grouped together.

Companies will need to provide an unranked list of three to seven financial performance measures that it determines are its most important measures (using the same approach as taken for the company-selected measure) – based on the last fiscal year (not the past five years).

They will be permitted, but not required, to include non-financial measures in the list if they considered such measures to be among their three to seven “most important” measures.  Companies may do so only if they have disclosed at least three (or fewer if the company only uses fewer) financial measures and the list may only include a maximum of seven measures.

Companies are not required to provide the methodology used to calculate the measures, but the SEC believes it should be considered if needed to prevent the disclosure from being confusing or misleading. Further, companies may cross reference to other disclosures in the proxy statement that describe their processes and calculations in determining NEO compensation as relates to these performances measures, if they choose to do so.

Companies may voluntarily include additional measures of compensation or financial performance or other disclosures, so long as the disclosure is identified as supplemental, not misleading and not presented with greater prominence than required disclosures.  For example, companies that do not use TSR in setting compensation may elect to explain any misalignment between compensation and TSR.

Companies will be required to use Inline XBRL to tag their pay versus performance disclosure.

Not incorporated into filings

The rules provide that the required information will not be deemed to be incorporated by reference in any Securities Act or Exchange Act filing, except to the extent the company specifically does so.

Companies, other than SRCs, will be required to provide the information for three years in the first proxy or information statement in which they provide the disclosure, adding another year of disclosure in each of the next two annual proxy statements.

The pay-versus-performance disclosure would only need to be provided for years in which a company was an SEC reporting company.