While the mythical unicorn is a rare creature, it has recently become a marketing phenomenon, with the unicorn’s rainbow-laden powers being harnessed to sell unicorn-themed products that can cover you from literally head to toe, i.e., from makeup (such as “Unicorn Snot®”, a glitter gel) to slippers and even a toilet spray made with “unicorn farts” (Squatty Potty’s “Unicorn Gold®”). Perhaps inevitably, brand owners have begun to battle over who can lay claim to a unicorn trademark. And this includes drinks that sound like coffee (but largely are not).

In April, caffeine aficionados found it was nearly impossible to avoid Starbucks’ limited-time promotion of its Unicorn Frappuccino. Purple and turquoise, and made of créme frappuccino syrup, milk, ice, mango syrup and “whipped cream-sprinkled pink and blue fairy powders,” the reportedly coffee-less drink was heavily promoted. One Brooklyn-based coffee and juice bar, however, was not enchanted by Starbucks’ frappe.

The End and its owner, Montauk Juice Factory, Inc., filed a trademark-infringement suit against Starbucks on May 3, 2017. According to the complaint, The End started selling a “Unicorn Latte™” in December 2016; before Starbucks launched its Unicorn Frappuccinio. According to its complaint, The End’s “Unicorn Latte™” spawned its own social media following due to its colorful appearance and “magical” qualities of its super-food ingredients. Montauk Juice’s federal trademark application pre-dated Starbucks’ Unicorn Frappuccino launch by several months. 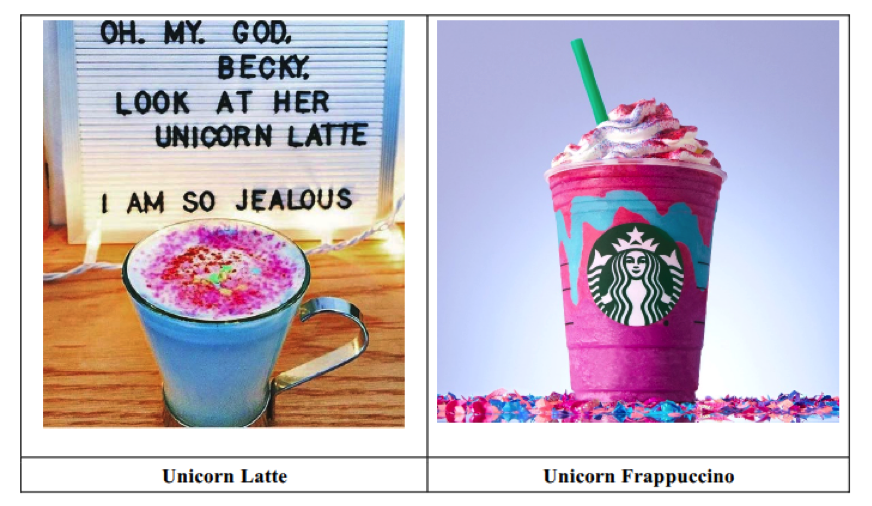 The singular issue in this case stands out like a jutting horn: were consumers likely to be confused by these dueling unicorn brands? But this one dilemma subsumes several questions, such as the scope of The End’s common law trademark rights. While a federal trademark registration would have conferred presumptive national trademark rights, common law rights may be more limited to where the product was sold and/or marketed. (As of this publication, Montauk Juice’s federal trademark application remains pending at U.S. App. Ser. No. 87/308,906.) And, while the complaint alleges that the Unicorn Latte™ became nationally famous due to its social media presence, social media’s impact on the trademark rights landscape is an emerging question.

A related issue is the strength, if any, of The End’s “Unicorn Latte™” mark. Generally, a trademark’s strength is determined by placing it on spectrum of relative “distinctiveness.” “Fanciful” marks (neologisms having no meaning before use as a trademark, such as “Kodak®”) are the strongest types of marks, while “generic” terms (common names for products or services, such as “cereal”) are afforded no protection. Within the spectrum also lie “descriptive” marks (those that describe the product or service, such as “multigrain” bagels), and relatively stronger “suggestive” marks (which indirectly suggest a quality of the product or service; such as “Greyhound” for buses, suggesting their speed and/or color). Courts often describe “suggestive” marks as those that require consumers to use some “imagination” to associate the mark with the product or service.

Does using an imaginary creature as a trademark necessitate a finding that the mark is, at least, “suggestive”? Or, given the plethora of unicorn-themed products to hit the market in recent years, many of which invoke the colors (if not power) of the rainbow, is the term “unicorn” descriptive, in that it describes a rainbow-colored product? If this case continues towards trial, that question may be answered on its facts. This issue will likely retain contemporary importance given the recent “unicorn” and “rainbow” trend in the food-and-beverage industry cited in the complaint and further evidenced by products such as the rainbow bagel (also based in Brooklyn).

If you would like to discuss how these issues may affect your business, please contact a member of Bryan Cave’s Intellectual Property Client Service Group.