In the absence of an enforceable federal drinking water standard for per- and polyfluoroalkyl substances (“PFAS”), many states have started regulating PFAS compounds in drinking water.  The result is a patchwork of regulations and standards of varying levels, which presents significant operational and compliance challenges to impacted industries.  This client alert surveys the maximum contaminant levels (“MCLs”), as well as guidance and notification levels, for PFAS compounds – typically perfluorooctane sufonic acid (“PFOS”) and perflurooctanic acid (”PFOA”)  – in drinking water across the United States.

On June 15, 2022, the United States Environmental Protection Agency (“EPA”) issued health advisories (“HAs") for four PFAS substances in drinking water.  The values are as follows:

The newly issued HAs for PFOA and PFOS supersede and dramatically reduce EPA’s 2016 Drinking Water Health Advisory Level of 70 ppt for PFOS and PFOA.

EPA's HAs are non-enforceable, but are intended to provide technical information to state agencies and other public health officials regarding health effects, analytical methodologies, and treatment technologies associated with drinking water PFAS contamination.  In fact, both the Chemours Company and the American Chemistry Council recently filed lawsuits against EPA to challenge these HAs.

Certain industry groups and states, such as Georgia, have stated that the HAs are “significantly below” the current levels of detection.  The Cambridge Water Department in Massachusetts further clarifies how the HAs are at “microscopic” levels:  “These new health advisories are also below current reliable detection abilities of scientific equipment (Scientists can currently detect PFAS compounds down to 2 parts per trillion).”  Although the HAs are non-enforceable, there is significant concern from public agencies and private industries about how to appropriately react to the HAs given the perceived impossibility of testing at these levels.

Many have suggested that values this low effectively equates to a statement that any level of PFOA or PFOS in drinking water may cause health effects, which raises significant testing, treatment, and permitting considerations.  For example, the State of New York asserted that to comply with an enforceable MCL of .004 for PFOA “would cost $1.5 billion statewide for upgrades and a further $78 million per year for operation and maintenance.”

According to the PFAS Strategic Roadmap, EPA expects to issue proposed drinking water limits, or MCLs, for PFOA and PFOS in the fall of 2023.  A national drinking water limit will require the entire country to evaluate the concentration of these two compounds in drinking water, and to implement treatment systems and permit limits to achieve the MCLs.

Until the federal government enacts MCLs for PFOA and PFOS, the regulatory landscape for PFAS compounds in drinking water consists of an array of widely-varying state-promulgated standards and regulations.  For example, concentrations range from 5.1 ppt (California; PFOA only), and 667,000 ppt (Nevada; PFBS only), depending on the PFAS compound, the nature of the regulation, and the state’s view on levels which may result in health effects.  For further detail, the chart below illustrates the significance of the discrepancies between the regulatory levels, only for PFOA and/or PFOS. 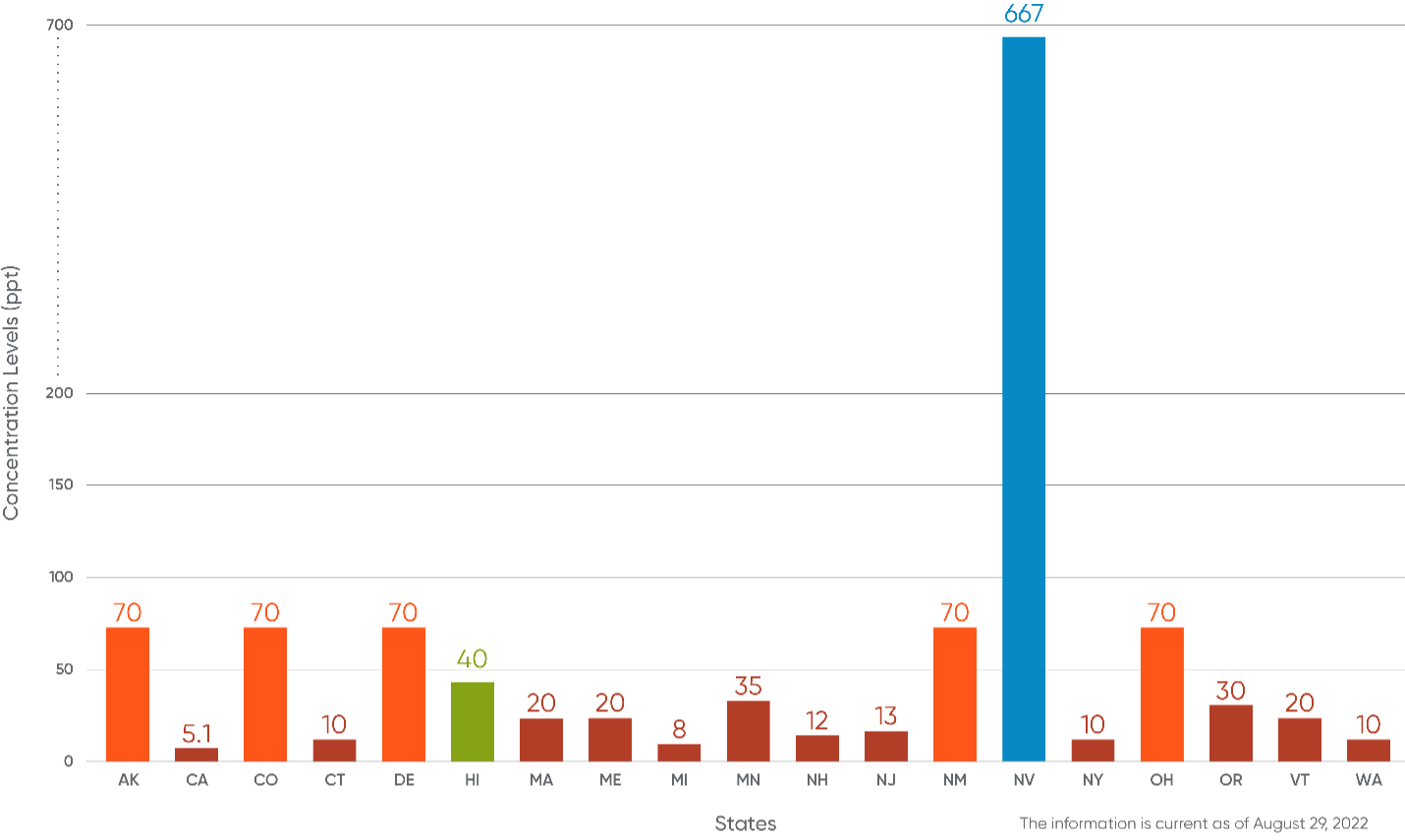 Delaware, Maine, and Rhode Island have enacted legislation to establish MCLs for PFAS compounds for drinking water, so implementing regulations in those jurisdictions may be forthcoming.  Moreover, Wisconsin is currently involved in an administrative process to formally establish drinking water standards.  Additionally, numerous states, including Iowa, Kentucky, North Carolina, Ohio, Pennsylvania, South Carolina, and West Virginia, have proposed, but not yet promulgated, drinking water regulations for PFAS, although Pennsylvania appears to be close to doing so.  These actions underscore that state-driven guidance and requirements surrounding the PFAS drinking water regulations are developing quickly throughout the country. 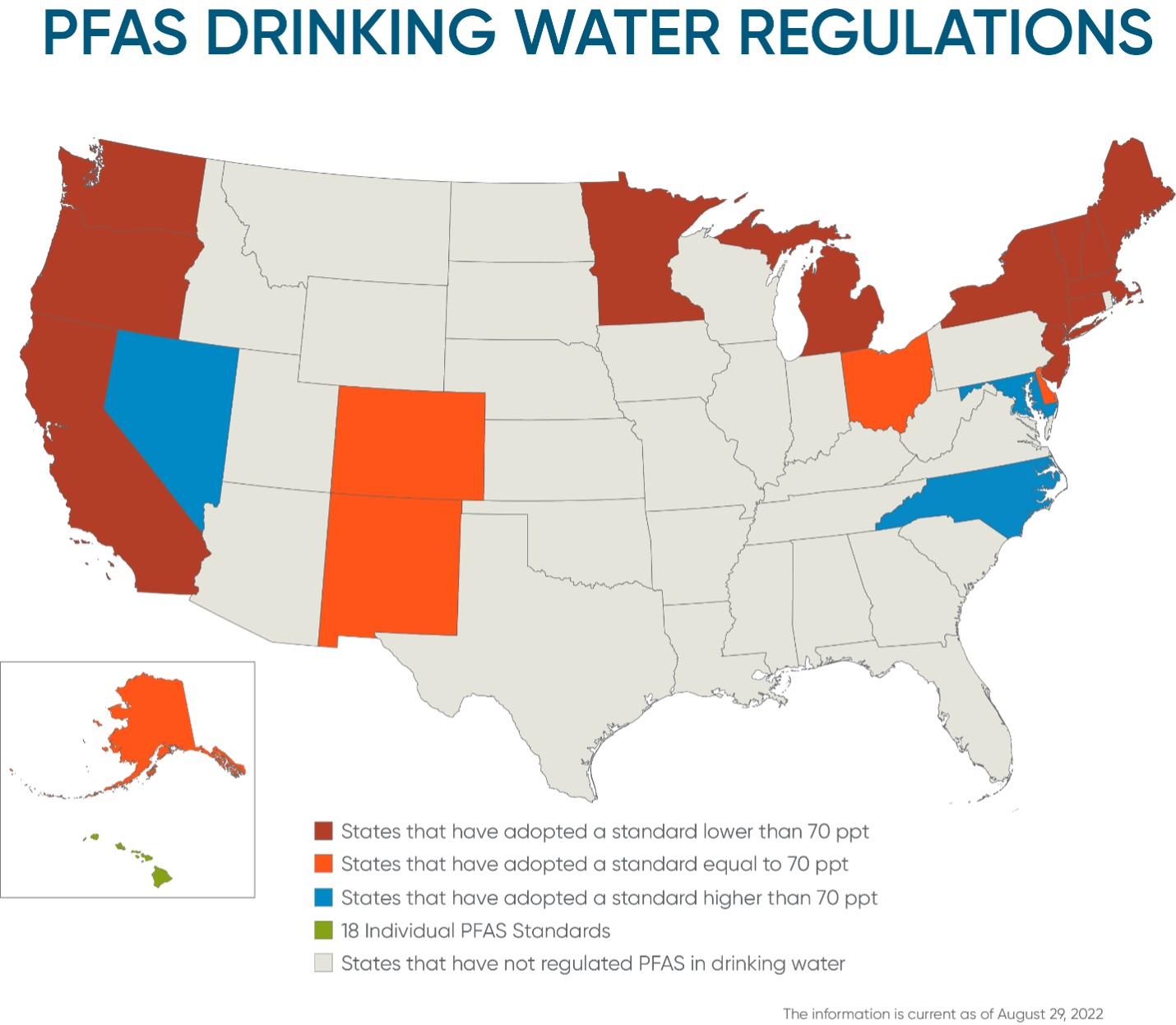 No PFAS drinking water regulations (as of the date of publication):

III. How Do These Limits Impact Businesses?

MCLs set the maximum concentration of a given contaminant that can be present in drinking water.  Publicly owned treatment works (“POTWs”) and drinking water systems are ultimately responsible for meeting the applicable MCLs and are required to ensure that drinking water distributed to the public meets these limits.  In order to do that, POTWs and state agencies often include discharge limits in the permits of upstream dischargers to the POTW or other drinking water systems to ensure that the effluent the treatment facility receives can be adequately filtered and treated to comply with the MCLs.

Businesses that currently or historically have used PFAS compounds, or have reason to believe that they may be present in their process wastewater effluent, should evaluate the following considerations:

Acquiring this information will allow businesses to determine whether they need to modify their operations to reduce or eliminate PFAS from their waste stream to achieve compliance with an existing standard, or in anticipation of likely future permit conditions.

The regulation of PFAS substances in drinking water will continue over the next several years as additional research is conducted on potential health impacts, and as regulators at both the federal and state levels develop a deeper understanding of the prevalence of PFAS compounds in drinking water and the efficacy of different MCLs.  In furtherance of this conclusion, a American Chemical Society report asserted in February of 2022 that PFAS substances were detected in 60% of drinking water public supply wells.

For more information on PFAS chemicals, and the regulatory and liability risks that they pose, please visit our PFAS webpage.  If you have a question about how to manage PFAS risk in any jurisdiction, contact Tom Lee, John Kindschuh, Emma Cormier, or any other member of our PFAS team at Bryan Cave Leighton Paisner LLP.